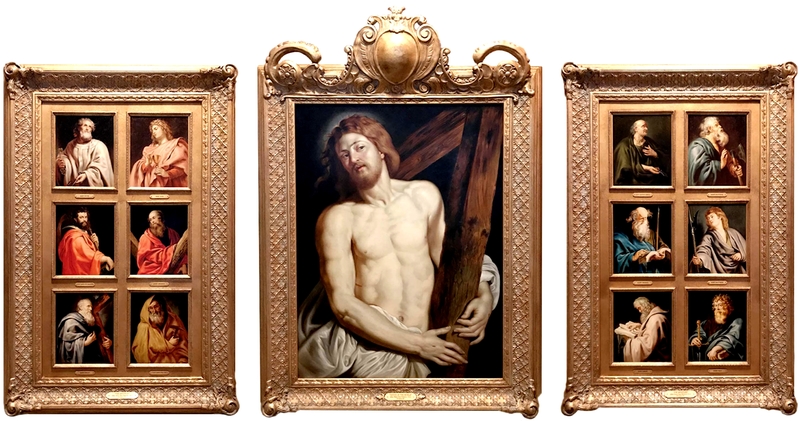 Savior of the World

Around 1612 Peter Paul Rubens was commissioned by the duke of Lerma, a powerful minister of the Spanish king Philip III, to make a series of the apostles. Twelve of the originals are now hanging at the Museo del Prado, in Madrid, Spain. Along with the twelve paintings of the apostles Rubens painted a painting of Jesus titled Savior of the World.
The series was lost during the early part of the seventeenth century, but reappeared in 1746 as part of the collection of Queen Isabel Farnesio at the La Granja Palace. The original painting with the "Savior of the World" has been lost. The half size portraits show each apostle with an attribute, a symbol by which he can be identified. They were depicted as strong men, with impressive old faces.
After many days of research on the internet, I was able to find the missing Christ painting, which was rediscovered in 1906 and exhibited as the missing work by Rubens, in London. The attribution was controversial, although it quickly found influential support. Aware of the controversy, but trusting its advocates, the Gallery bought the painting in 1929. This claim would continue to find supporters for several decades, but scholars would later come to unanimously see it as a copy, one of several known. In the Corpus Rubenianum, the standard catalogue of the painter's work, it was published as the best serving example after the missing original. Due to its apparent quality, the possibility of Rubens' participation had some credence, and the Gallery accepted it as by the master and his workshop.
Many copies and variants of the Prado Apostles survive; only one set is certainly from within the workshop, this is now in the collection of the Pallavicini, Rome. Others were likely made outside the workshop, which attests to the series' popularity.
Having a great love for Rubens works and researching the story behind all of apostle paintings, I thought what a great tribute it would be for a modern day artist to re-capture all of the original paintings and assemble them in a triptych style of framing. After doing a few sketches for ideas, I decided to have Christ as the center figure, and have six apostles on each side. In order to make this work, I decided to make smaller paintings and group them into two frames, one on each side of the center frame. The custom frames are of my design, in order to fit the time period of the 1600s.

To Inquire or Purchase